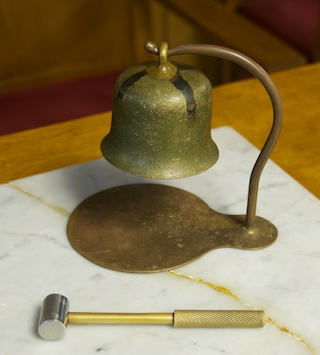 Official Visit of the Grand Master 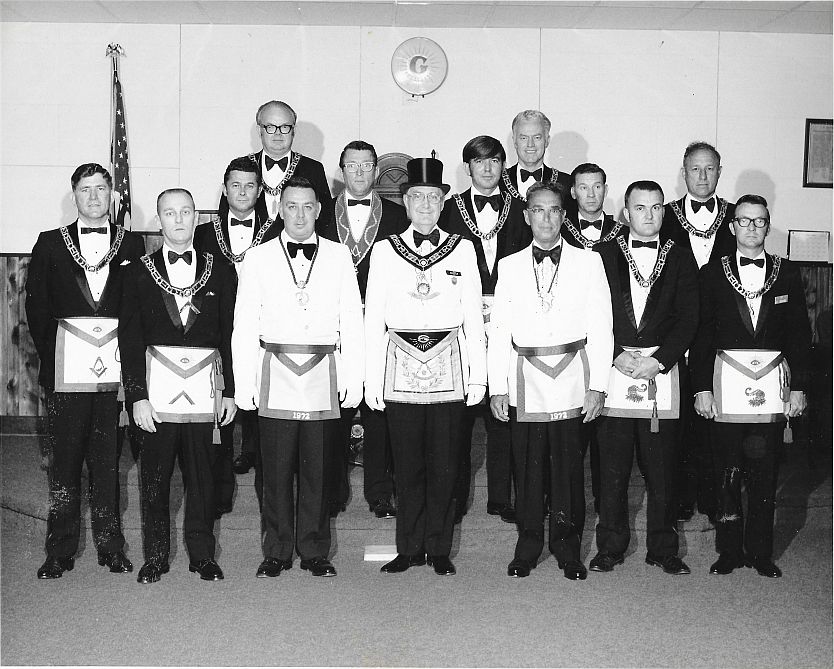 Photo courtesy of Princess Anne Lodge No. 25
left to right 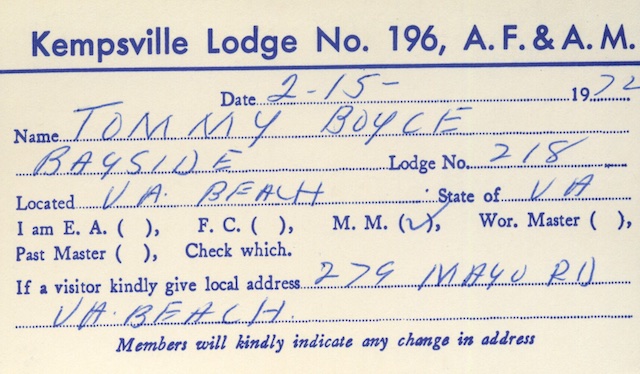 Brother Tommy Boyce visits Kempsville Lodge in February of 1972. Brother Boyce would serve as Worshipful Master of Bayside Lodge No. 218 in 1973 and District Deputy Grand Master of the 56th Masonic District in 1980. 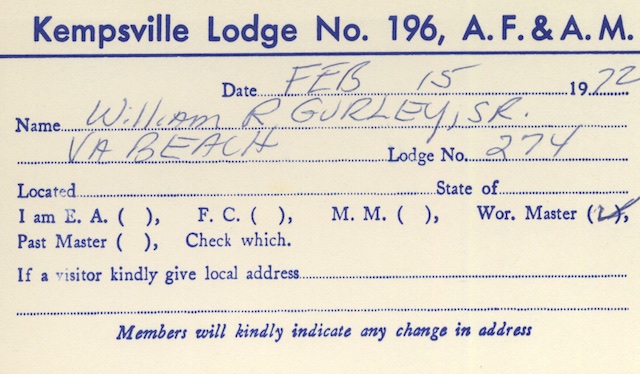 Worshipful Bill Gurley visits Kempsville Lodge in February of 1972. Worshipful Gurley would serve as District Deputy Grand Master of the 56th District in 1989 and would again serve as Worshipful Master of Virginia Beach Lodge No. 274 in 2012 during their 100th Anniversary Year.

George Joseph Wallace, also affectionately known as "Katelyn's Poppy" and Dad, went peacefully to be with our Lord and his loving wife Margaret on April 18, 2008. He was born Jan. 9, 1927 in Norfolk to Josephine Cecilia Wallace and George Joseph Wallace. He leaves behind a daughter who adored him, Joni Elizabeth Wallace Falk and son-in-law Gary Falk; a son, George Joseph Wallace Jr. who was his best "buddy," and Peggy Joyce Parker who stayed by his side until his last moments with Joni and Joey. Also surviving George are special loved ones, including his beloved granddaughter and the love of his life, Katelyn Falk; his sister, Louise Bosman; Bruce, Jamie, Jennifer, Evan Tyler, Joey and Josh along with many nieces, nephews, and numerous friends who loved listening to his many stories and his advice on how to live in a world where it was a priority to help those in need and to thank the Lord for all the blessings in your own life. George was preceded in death by his wife, Margaret; his brother, Edward Wallace; his sister, Virginia Buechler and his faithful dog, Brandon. George accomplished many great deeds in his 81 years of living. He began life in the Army at the age of 18. He was a Quality Assurance Specialist at the Naval Air Rework Facility for 32 years and was the past national president of the Naval Air Rework Facility. He volunteered in numerous projects, even helping construct the Kids Cove at Mount Trashmore in Virginia Beach for all children to enjoy. He had been a member of Memorial United Methodist Church since 1963 and taught the Loyal Builders Sunday school class for a number of years and was the treasurer of his class for many years. He also worked with the Meals on Wheels program, enjoying every moment he spent with people who needed him and looked forward to seeing him each week. He also loved reading to his granddaughter's class and eating lunch with all her friends, where he was known as "Poppy" at Princess Anne Elementary School and Cape Henry Collegiate School. Even the neighbors and neighborhood children knew him as "Poppy," and will miss his presence at horseback riding, softball, basketball and tennis events. The streets and highways of Virginia Beach will miss that special touch he gave as he cleaned them as part of the Adopt-A-Highway Program. George was also very active in Freemasonry, becoming a member and Master Mason in Kempsville Lodge No. 196, on May 5, 1964. He served as Master of the lodge in 1972 and was the District Deputy Grand Master for the 56th Masonic District until 1984. He served Kempsville Lodge as their treasurer for 28 years, retiring from that position in December 2006. He served on the Board of Trustees for the lodge for more than 30 years. He was also very active in Scottish Rite Masonry and was honored with the presentation of the 33rd Degree with his family proudly watching on as he received this honor. He was a member of the Kempsville Order of the Eastern Star and was the Bethel Beau of the Job's Daughters, a distinction he was truly proud to have held. He also enjoyed being a member of the Great Bridge Royal Arch Chapter No. 82, the Princess Anne Council of Allied Masons, and was held in high esteem with the Degree of Royal Ark Mariner. He was also president of NAS Toastmasters Club and a member of Toastmasters International District 66. He loved his friends and his mission at the lodge and will be truly missed by all those who knew him. Friends may join the family at Smith and Williams Funeral Home, Kempsville Chapel, Tuesday from 7 to 9 p.m. A reception will be held in the funeral home during the time of visitation to share good memories and pay tribute to a wonderful man. A church service will be conducted by the Rev. John Cole in Memorial United Methodist Church, Gammon Road, Wednesday at 3 p.m. Masonic Rites will be administered graveside in Colonial Grove Memorial Park immediately following the church service. Please join us in saying our final farewell to one of the most loving angels heaven has ever been blessed to receive. We will all miss his kindness and gentle nature.